Aeroplan Hints at Partnership Between Etihad and Air Canada

This post contains references to products from one or more of our advertisers. We may receive compensation when you click on links to those products. Terms apply to the offers listed on this page. For an explanation of our Advertising Policy, visit this page.

Etihad’s financial woes continue to mount, as the Abu Dhabi-based carrier remained unprofitable in 2018 for the third year in a row, posting a $1.28 billion loss for the year. Rumors have been circulating for years that Etihad is on the verge of joining Star Alliance, increasing its reach and giving it access to profitable codeshare agreements around the globe. While Etihad currently partners with American Airlines for reciprocal mileage earning and redemptions, it is not a member of one of the major three alliances.

The rumors about Etihad and Star Alliance gained some traction this week, with One Mile at a Time reporting that Aeroplan, Air Canada’s independently run loyalty programme, announced a new partnership with Etihad launching on May 1. 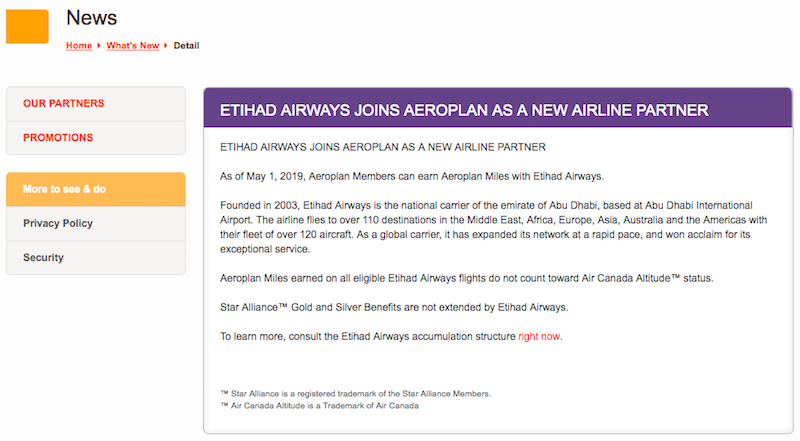 An Air Canada spokesperson quickly issued a clarification that the two were not, in fact, launching a partnership yet, but the specificity of the denial hints that something is under discussion.

“Clearly our content team is excited about new earning opportunities for Aeroplan! While Air Canada is in discussions with Etihad Airways, we will not be launching a frequent flyer partnership tomorrow. We look forward to sharing more details with you as they become available.”

The rumored partnership, if true, would still be a few rungs below a full Star Alliance membership. Aeroplan members would be able to earn miles for travel on Etihad, though the earnings would be limited to redeemable miles and not elite qualifying miles for Air Canada elite status. Additionally, Star Alliance elite benefits would not apply for travel on Etihad Airways.

No, Etihad is not joining Star Alliance just yet. But if this rumoured partnership with Air Canada comes to fruition, it will be an important first step for the struggling Gulf carrier. There are still plenty of unknowns at this point, including what the earning and redemption rates would look like, but Air Canada’s lack of a complete denial likely means that some partnership is in the works.

Welcome to The Points Guy!

Ethan Steinberg is a contributing writer for The Points Guy UK
You might like
Marriott announces net-zero pledge by 2050
News
11h ago
American and JetBlue are getting sued, but your travel plans are safe
News
Yesterday
Traffic light changes, PCR tests scrapped and USA opening: Your travel questions answered
News
Yesterday

Editorial Disclaimer: Opinions expressed here are the author’s alone, not those of any bank, credit card issuer, airlines or hotel chain, and have not been reviewed, approved or otherwise endorsed by any of these entities.

Many of the offers that appear on this site are from companies from which The Points Guy UK receives compensation. This compensation helps pay the costs associated with running our website, and does not result in any additional fees to you. This site does not include all credit card companies or all available credit card offers. Please view our advertising policy page for more information.

Editorial Note: The Points Guy UK is independent; the opinions published here are always those of the reviewer, who has final editorial approval. The information, including card rates, product pricing and fees, presented in the review is accurate as of the date of the review – please check product pages for the most current information.